Here is one tip for those who are dealing with clients in their astrological work. Be aware of the temptation to make decisions for their lives. Often times when people are indecisive, go to diviners of different types in order to hear from the diviner what is about to ‘come’ in their lives. This puts great amount of responsibility on the shoulders of the astrologer. I do believe we have free will inside the conditioning of our chart/life, so because people are too lazy (and we all are pretty damn lazy to use our free will!) to use their free will inside the patterns of destiny, doesn’t mean that you as an astrologer should do this for them.

I am looking at a charts of two brothers who are having problems with alcoholic mother who works against their best interests.
It is intriguing to see how both have the Lot of Mother in the 12th sign of Bad Spirit. But not only this, both have the Lord of 12th turned away (in aversion) to the 12th sign. I suppose (among the other factors involved) the 12th sign position is not enough, and the position of the Lord in adjacent sign is accentuating this poor position of the Lot in the 12th sign. I have seen other charts with Lot of Mother in 12th but with good Lord and in regard to the sign, and there were no problems with the mother, especially in charts where there are other strong indicators for good relationship with the mother. This is why it is important to count the factors and to see the chart as a whole.

“Astrology is something that has been an empirical science since before the dawn of time. The unfortunate thing about astrology is this, it is just like some people who have no musical ability, they take a few lessons and than they go out there and start teaching people how to play music. You know what kind of result you would have. In the same way, people who have no talent for astrology – you have to have talent for deep and profound metaphysics and occultism, the metaphysical part of the occultism as well as other elements – to become a true interpreter of the forces of consciousness and life which we call the forces of the universe, or zodiacal and planetary forces.” – Ann Davis (The True Meaning of Planetary Influences)

Those of you who ask [horary] questions these days, and if you happen to be ‘lucky’ to have Venus/Mars involved in the question as the significators, would witness interesting configuration where Venus seeks application toward Mars by square with reception, but Mars escapes and Jupiter cuts Venus’ light seemingly destroying the matter. But if Jupiter is in some powerful angle, and receiving Venus’ disposition in its exaltation and angle, being through beneficent trine, may bring the matter to realization. Interesting heavenly playground nevertheless. 🙂

I may provide an example these days.

It is interesting to ponder on the concept of ‘change’. After listening to Bernadette Brady’s lecture on chaos theory and when one gets off its head from the deterministic concepts of the Stoics [though these are wrongly understood in general] one realizes that even inside the concept of fate, the pattern, or however you want to call it, change is possible and even this change is shown by the stars. I will give you an example.

As I mentioned many times this year, Lord of the Year in my nativity is Jupiter [I would say with Venus partnering because it is in the sign of the annual profections]. This means that Jupiter will dispose my beingness [esse] in this year, as well it will show outer circumstances and events happening around me, of which of course, I am a part. Now, Jupiter is after all, the greater benefic. Even though weakened in natal and in solar by accidental and essential circumstances of the charts, it is in the 11th house of the good spirit in the Solar Return. Now, through transit currently Jupiter transits my ascending sign Cancer, which is the place of its exaltation.

I do feel change growing on inside me: I start to think more positively about life, I was able to recognize many of my unconscious patterns that earlier governed my life in a compulsive way, and I feel urge to grow and work on bettering my life. Jupiter is really a liberator in this regard. It transits me (ascendant), my beingness, my psychology, my body, etc. I really have spent all these months working on my self with considerable amount of progress which is shown on the outer shell of me.

These are the times in which change is really possible. I know that last year, no matter how hard I worked on my self, Mars and Saturn were ruling the times, and I was surrounded by circumstances in which was very hard for me to practice self-development. I didn’t have so many insights as I have in this year, and my mind was not so sober as well. Planets seems to really dispose our essence, our beingness, especially those that in that particular time dispose the years of our lives. This can be really experienced only through constant thinking and realizations on the matter, this can’t be read and understood from the  books.

Now, another subject of pondering on my side is the subject of the cycles of which the earliest astrological authors spoke. When I now compare these two years (2012 and 2013) with the years 2000 and 2001, I notice the same patterns emerging, and guess what, this is shown by the profections going around through the 12 signs and getting back to the starting point (a cycle). Year 2000 was really bad year for me, but in 2001 I started a new cycle that brought me on a new path on self-discovery and this resulted with some new circumstances around me. You will notice that these 12 years cycles also correspond with Jupiter. In my case, they start when Jupiter comes to the ascendant.

We should really try to use these beginnings and grab the change that is emerging from the ‘chaos’, or from the ‘order’ [you choose].

Here is another interesting tip I noticed in my practice of observing different charts.

I have noticed one interesting repetition of Venus in 9th house of people who were idolized [loved very much] by the masses.

The first chart is that of Marilyn Monroe: 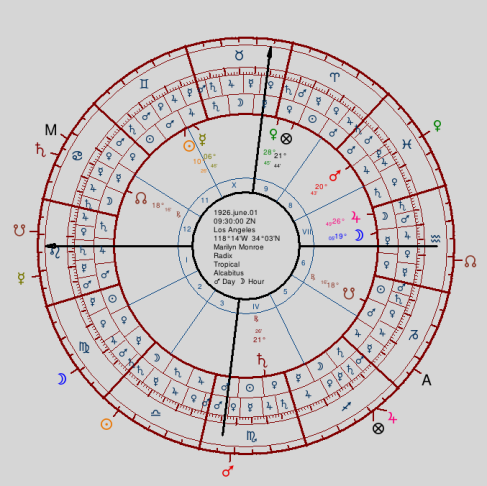 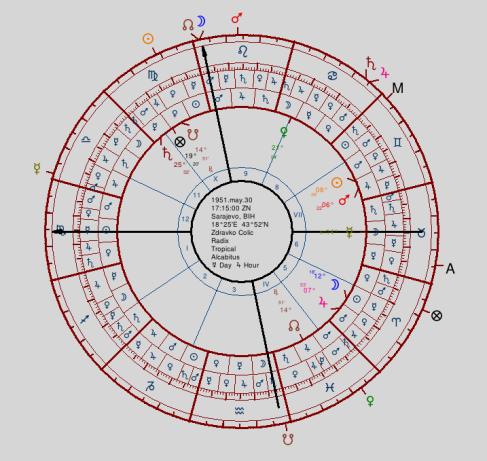 The third chart is of the Macedonian pop singer Tose Proeski, who tragically died in a car accident in year 2007. He was also very much adored by the public and especially by the female population. After his death, many here in Macedonia and the ex-Yu countries speak of him as a ‘sent from God’, ‘an Angel’, etc.

Notice how Monroe and Tose both have Venus on Lot of Fortune in 9th house. Venus in 9th automatically aspects the ascendant sign through the very potent and beneficent trine. It seems that this position gives some graciousness to the native, some charisma which is noticed by the masses as a ‘God sent’, persons with ‘special mission’; people to whom the masses look up to, people who are adored by the masses as a sexual, lovable icon.

Here is another chart factor I am observing on a repetitive basis in different charts. If the sign of the annual profections of the ascendant, fall as a sign of the descendant (7th house) in the Solar Return, it will activate the subject of partnership in that year, and if all other things remain equal, marriage. I have observed it in activating the subject of open enemies and forming of other types of partnerships too (not necessarily love). Other factors will tell you what of the above may prevail. Astrology is all about combining the different factors into a final conclusion (judgment).

Why it is important to quote from the ancient masters of this art?

There are many reasons why we should quote them in our articles, delineations, conversations on the subject, etc. First of all, quoting them shows that we are still in the process of learning and that we are not ‘already there’, as many assume that are. Even though they call themselves ‘traditional astrologers’, they think that they are above everything theorized or practiced by the ancient astrologers, so they don’t find it necessary to read, investigate or put in use those principles that once were applied by these astrologers. For them quoting is a sign of weakness, of fear that you are hiding your self behind the words of some authority. This may be the case, I agree, but one can’t assume that always is the case. I am amazed by how people jump into conclusions very rapidly, from one to the another diametrically opposed.

So, do not be afraid to quote just because some people are sarcastic and mocks you about it. Congratulate them instead, for their achievement of being ‘already there’ and ‘knowing everything possible on astrology’. 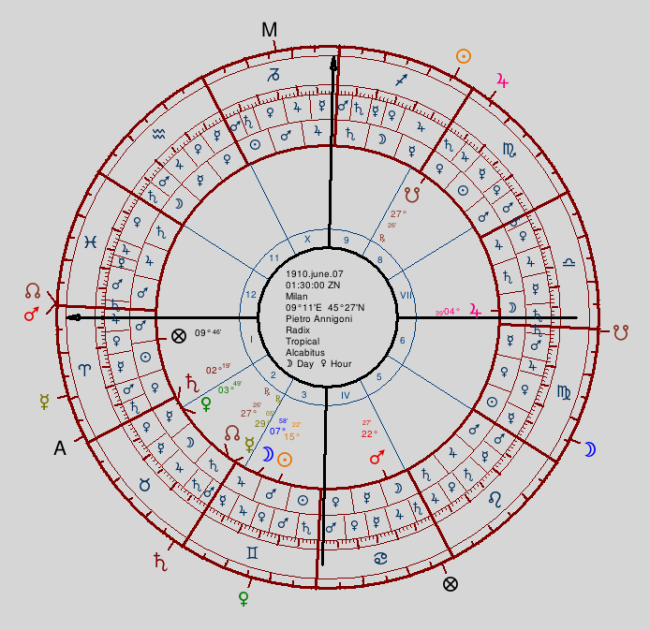 The importance of the promised in the birth chart.
The chart of the famous Italian portrait painter Pietro Annigoni with AA rating on astro databank. He was married to Anna Giuseppa Maggini who died out of illness. Pietro re-married after a couple of years being a widower.