The planet having most dignities in these places will be almuten. Then Abū Ali goes to say:

“…because if it were an ‘ittisāl or a commingling or configuration between the one which had more dignities and the Lord of the Ascendant, the native will be a royal man, and will get rich from a kingdom, and will obtain the highest honor. And if there were not an ‘ittisāl nor a conjunction nor configuration, the native will be unknown to the king, of middling value, and little power.”. [Abū Ali, On the Judgment of Nativities, p.294, trans. Benjamin N. Dykes, PhD]

‘ittisāl is application to the degree by conjunction or aspect.
What is 10th House?

Bonatti: “Albuas and all the other ancients said that the tenth house is the kingly house and that it signifies imperium and rule and professions and dignities and offices and every skill which you may exercise and be called a “master”. And he was called The Master whom God desired. But it (tenth house) signifies mothers, the paternal grandmothers, and all such old women and female friends on the side of the family. Adila said that it signifies divine things and honours and political offices, and similar things. And Al-Kindi said that it signifies the king, glory and fame of praise”.
[Bonatti, Liber Astronomiae Basel 1550, Third Part of the Second Tractate col. 61-97. translated  by Robert Zoller]

What Abū Ali is trying to say here is that if the Almuten of the places connected to all these meanings above, has ‘ittisāl with Lord of Ascendant, this native will be known by the king, and if not, he will remain without acknowledgment and hence little power. Knowing the King is possessing great power. Nowadays this can be translated as knowing people in government, political leaders, or knowing someone who posses great power in the society. 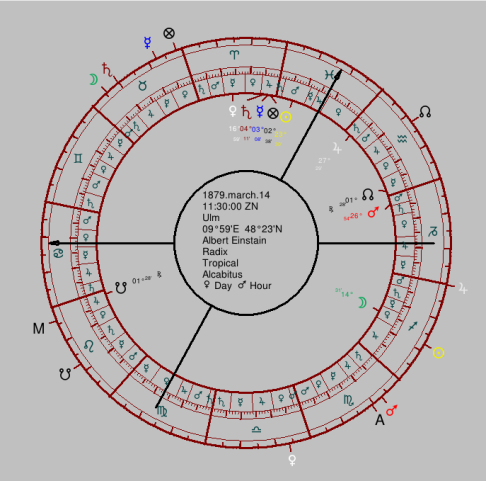 Look at Albert Einstein’s chart. Almuten (using MC instead of 10th sign) is Venus and she is to be found in 10th sign and Moon Lord of Ascendant is making ‘ittisal, or trinal application toward it inside 3 degrees of orb. Now this in Hellenistic astrology is called ‘Figural Conjunction” and is very powerful, more powerful then application with wider orbs. I think this is also what is meant by the ancient authors that sometimes planet in 6th will give indications for native’s work BUT if they are configured with planets in the 10th. I think this is perfect example of what ancient meant when they said this, and wouldn’t apply if there are no planets or even more, ‘ittisal with the planets in the 10th. The same holds true for the 2nd Place.

“Which if the planet who had greater dignity in these things were in its own domicile, and in a good aspect with the Lord of the Ascendant, the native will have a kingdom and great power”.

So, the ‘good aspect’ is also prerequisite. Here we can see that Moon applies toward Venus via trine, which is most beneficial aspect.

“..and will get rich from a kingdom.”

Did Albert Einstein get rich from a Kingdom?

Well, if we apply the power comparation, then receiving the Nobel Prize award and the money from the Nobel Foundation, can be treated as getting rich from Kingdom. I mean, this is not Kingdom, but it is highly official organization, and in those times when Abū Ali wrote this, the only highly official organizations were the King (Sultan) and probably the Religious governors. Nowadays we have a lot of powerful organizations. The thing is that the 10th house is associative with power and authority. Every organization with power and authority, and the native receiving power from this, can be treated as ‘being known by the king’. Actually, Albert Einstein was known by the ‘king’ and the greatest officials in Germany, and through out the world. His letters to the highest officials and asking for remaining the peace in the world, are widely known today.

“…and will obtain the highest honor”.

Nobel Prize is the highest honor for a physician.

Even if we don’t want to use compound Almutens, Venus is Lord of exaltation of MC and also rules the triplicity, so she is disposing the things related to the 10th house, that is, she is determined toward the things relating to career, status, honors, etc.

Venus is not in dignity, actually she is in her anti-domicile or what the Medievals call the detriment. According to Serapio planets in their anti-domicile ‘turn bad’, and examining his life, we could say that something of that sort happened, but this is not the place to enter in all the story of his. What is more important here is that the good aspect between the Moon as Lord of Ascendant and determination toward the Esse of the native, is making ‘ittisāl toward Venus – almuten of Work and Status, and Almuten of MC, positioned in 10th sign pertaining to the same: work, status and honors.

All this is an indication of a successful nativity, recognized by the ‘king’ and society and achieving certain degree of power in the world.

Now, what would have happened if Albert had only the ‘ittisal between the almuten of work and Lord of Ascendant without the further testimonies? Well, I think he would have been recognized by the higher officials, and would have achieved certain degree of power, but this could have been in accordance to the measurement or proportion of testimonies. The more good testimonies, better.